skip to main | skip to sidebar

Thoughts about the Zimmerman trial

Unlike in movies, in real life when someone has decided that they are going to shoot or kill somebody experiences a massive rush of adrenaline as they are winding up to actually do the deed.

Granted, there are probably Mexican drug cartel killers who don't get worked when they are about the shoot someone, but that's not how normal react to life and death.

Here is a recording of a man who observes burglars at his neighbor's house. He states early on, and throughout the call that he is willing to shoot them. As he sees them exiting the house, he decides that he needs to go and stop them. You can hear the tone of his voice change, the pitch gets higher, you can hear the stress as that adrenaline rushes in and he prepares himself for violence.

Let's now listen to George Zimmerman's call to the police. His tone stays pretty calm and even the whole time, which is consistent with someone who is not ramping themselves up to go shoot somebody.

(There is some swearing.)

Either George Zimmerman is Han Solo, http://youtu.be/mu-TZpGdszA?t=1m47s  or a cold blooded mass murder, or he wasn't planning on shooting Trayvon Martin.

Just my two cents.
Posted by Dave Sohm at 7:12 PM No comments:

Recently there has been a cry for gun control, to prevent the kind of violence perpetrated in Connecticut. One of the biggest arguments is that if a certain type of rifle was unavailable to the general public, or if there weren't 30 round magazines then less people would have died. There is also an implication that normal people shouldn't be able to have military-style weapons.

Take Piers Morgan for example. In a recent show about the Sandy Hook shooting, he was nearly hysterical as he asked why anybody would need a Semi-Automatic rifle. You can't hunt with an AR-15 after all.

By bring in hunting, he conjures up images of non-military hunting guns like muzzle loaders, lever action cowboy guns, and bolt action deer rifles. These types of guns aren't the High Capacity, Rapid Fire guns like an AK or an AR.

What these guns have in common is that they all came about as military weapons, and were cutting edge, rapid fire, high capacity weapons, at the time they were introduced.

First, let's look at muzzle loaders. By themselves, they wouldn't be a terribly effective weapon, but a team of disciplined soldiers would be a formidable force to be reckoned with.

Here is a video of training for Last of the Mohicans. These actors have been taught British Army tactics authentic to the heyday of musket warfare.

Skip to 16:00 to see them really running on all cylinders.

Muzzle loaders are still in use today by hunters who really want to test their skills. But their roots are still as the tip of the spear of British might.


The next traditional hunting gun in America is the Lever Action rifle.

Its action is operated by swinging a lever down and out, then back to eject a spent casing and load a new round.

There are a variety of different rounds that can be shot from lever guns, from 44 and 45 caliber pistol rounds, to more powerful rifle rounds like the 30-30. 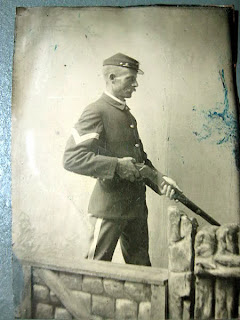 This type of action was adapted by the Union army, which gave an obvious advantage in battle.

But lever guns are still slow. Slower than a semi auto, but. . .

Our next hunting rifle is the traditional bolt action deer rifle. 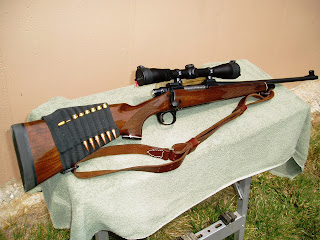 For a period, the British worked out a system, and a slick rifle design, that allowed their rifle to be an incredibly effective war machine.

The rifle, plus training, resulted in a tactic called the Mad Minute.

That brings us to the more modern action of semi-automatic.

Semi-automatic means that one shot is fired for every trigger pull. This is different than Fully Automatic weapons, where the gun automatically cycles and fires while the trigger is held down.

Since semi automatics are more modern, I wanted to see exactly when this technology was developed.

Here is the gun.

From Wikipedia,
"The first successful design for a semi-automatic rifle is attributed to German-born gunsmith Ferdinand Ritter von Mannlicher, who unveiled the design in 1885."
http://en.wikipedia.org/wiki/Semi-automatic_firearm

So when Piers Morgan, or anyone on television, or radio, or any media outlet starts making noise about semi-automatic rifles, and how dangerous they are, as if this is new, deadly technology, they are lying to you. Normally I would say ignorant, but a simple google search pulled up the entry about the Mannlicher 85, so journalists have no excuse. Their profession is built around finding and telling the truth, and verifying sources.

Also, the AR-15 isn't the most powerful rifle that you can get. It shoots the 5.56 millimeter round, which this article talks about.
http://www.telegraph.co.uk/news/newstopics/onthefrontline/6451003/Bullets-used-by-British-soldiers-too-small-to-defeat-Taliban.html

Warning: a deer gets shot.

And for those who say you can't hunt deer with an AK 47,  the 7.62X39 MM round that the AK fires, acts very similarly to the traditional 30-30 round from a lever action rifle.

And you can hunt deer with an AK.

So keeping in mind that any 'Assault Weapon Ban' would be an attempt to outlaw 130 year old technology, some may say that we need to try it anyway. Well, one time in 1999, right in the middle of the Clinton Assault Weapon Ban, this happened.

Those guns were full auto, which have been heavily restricted since the 1930's. While the AWB ban did make magazines very expensive for civilians to buy, the law did not prevent this from happening.


In fact, laws only prevent things by punishing people who break them, after the crime is committed. The prevention is a deterrent, a fear of punishment. For those who don't fear the punishment, then it isn't much of a deterrent.

If you take into consideration that there are estimated 80-100 million gun owners in the US, owning 300+ million guns, then if this population was dangerous, then there would be millions of deaths every year from guns. However, the latest crime data put 'gun deaths' at around 30,000. That is a rate of less than 1%.

So if legal gun owners aren't a problem, then why are laws being proposed that would impose a fear of punishment on them? Wouldn't you want to deter people who are more likely to cause violence in society? And what do you think would deter violent dangerous people more, the knowledge that the populace is disarmed, or the knowledge that the woman you are about to mug might shoot you?

I think what it comes down to, is the question of self defense. If self-defense is ok, then how could you justify any controls or restrictions placed on the ability to defend yourself? Is it ok to use a gun to defend yourself, but not ok to fire 12 shots?

Lets think of it another way. Do we restrict lens length, or power, or the size of memory cards or of the digital sensors inside cameras, in order to punish child pornographers? Do we tell the public that they can own a Canon Rebel, but not a Canon 5D, because the 5D has an enormous sensor and it's only legitimate use is by people in the movie business, and it has no legitimate snapshot purpose?

"No honest man needs a lens longer than 20mm. You don't need a zoom lens to take photos at a Christmas Party."

Dave Sohm
Graduate of the University of Utah, married with three kids.